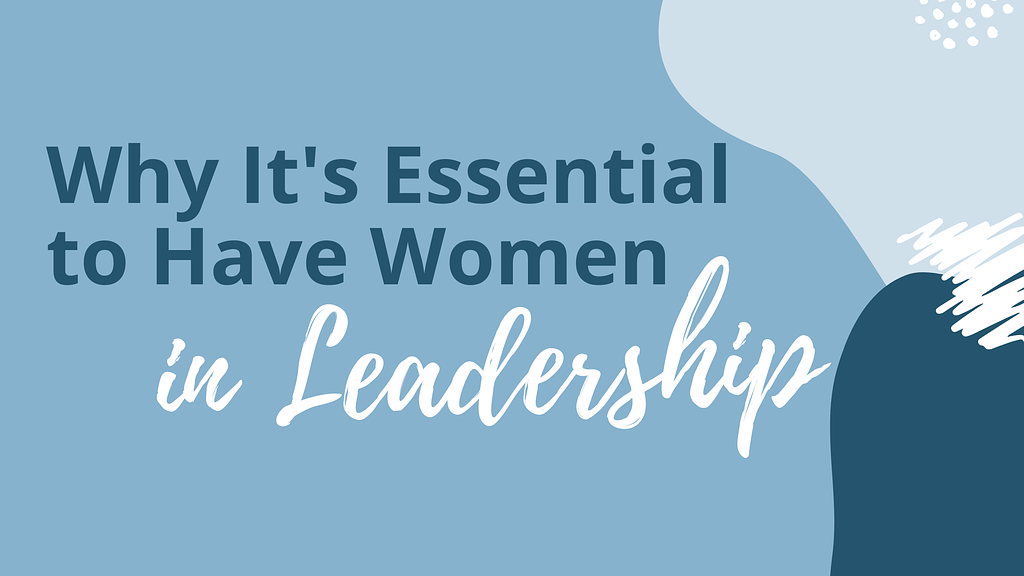 Why It’s Essential to Have Women in Leadership

When women lead, we all win.

This month, the world witnessed something historic. For the first time ever, with Kamala Harris as our new Vice President-Elect, there will be a female, Black, South Asian leader in the White House. Harris certainly isn’t the first woman to be qualified for the role of Vice President. But still, she is the first, and we know she will not be the last.

While it feels wonderful to see yourself reflected in someone of such accomplishment, there is so much more to it. There are countless reasons why women should be in leadership roles at rates equally high to men. Here are just three examples.

What happens when everyone in a group has the same background and experiences? Not too much. It’s the differences among individuals that create discussion, that generate new ideas, and that share unique ways to approach problems.

Especially in today’s competitive market, it’s critical for those in leadership roles to be ahead of the game no matter their industry. Unsurprisingly, more and more studies are showing that the best way to do that is to build as diverse a team as possible. According to an article by Inc., “People who differ from one another…bring a diversity of perspectives to an organization, which enhances creativity and encourages the search for novel information. This, in turn, leads to better decision-making, and ultimately, greater success.”

So much success in fact, that increasing gender diversity in the workplace would help not only the companies facilitating such diversity, but would increase the overall GDP of the entire country. Bringing more women into leadership, works in everybody’s favor.

The traits that are often seen as distinctly “male” or “female” also generally carry their own additional stereotypes, which have lent themselves to the (incorrect) reasoning behind letting men lead and women follow. For instance, males are viewed as strong, confident. They make deals and command armies. Women, on the other hand, are assumed to be gentle, accommodating, and empathetic.

It’s true that people frequently do possess the “feminine” or “masculine” traits associated with their given gender. But it’s not a bad thing to have one or the other: just different. These natural “feminine” traits can bring a new kind of power and success to a team, when a woman is placed in leadership. It’s also these more feminine traits that are viewed as the increasingly important “soft skills.” According to Harvard Business Review, women leaders show great success in coaching and motivating others, in recognizing the strengths and needs of their employees, and in leading empathetically.

These things don’t make the women leaders any less effective than their male counterparts. Rather they bring additional but equally (sometimes more) effective ways of doing the job into the mix.

Women make up more than 50% of the total American population. However, our women in leadership roles aren’t nearly so close to 50/50. Today, 7.4% of Fortune 500 CEOs are female (an all-time record). In 2020, just 23.7% of the United States Congress was female. And until this month, after 232 years, there had never before been a woman elected to the role of Vice President.

“In the future, there will be no female leaders. There will just be leaders.” – Sheryl Sandberg

Seeing women in these positions is so important. It’s important because they’re just as qualified and capable as the men at the table. They deserve the roles, and can make a difference within them. Because every woman who becomes a leader gives a voice to other women who may be denied one. There’s power in representation. Seeing women lead shows other women and girls that they too can reach their aspirations, no matter how high.

How YWA Helps Women on the Path to Leadership

It gives you the opportunities and the connections to help build your skills and confidence, and provides a place to begin to test your leadership abilities.

Said Jou Spitler in her blog post about attending the One Young World Summit in 2019, “YWA helps members become more well rounded in their personal and professional lives…[It] provides a diverse group of professional women with opportunities to connect with and learn from their peers and other leaders in the community.”

For both President Anastasia Teague and Past President Virginia Moore (2020-2021 Board), YWA provided them with what they consider “building blocks” to leadership. Each of them started out by applying for a committee chair role. Neither was certain what the role would entail. But, “it sounded like a good way to get involved with the organization and meet more people. Those chair roles led to VP roles, and then president-elect.”

Just imagine what they’ll do next. Imagine what you could do – the possibilities are limitless.

To learn more about Young Women’s Alliance committees, check out our Committee page. All members are welcome to attend meetings or volunteer as committee members: just register via the InfoHub event calendar in your member portal.

I Learned the Most About Leadership By Not Leading