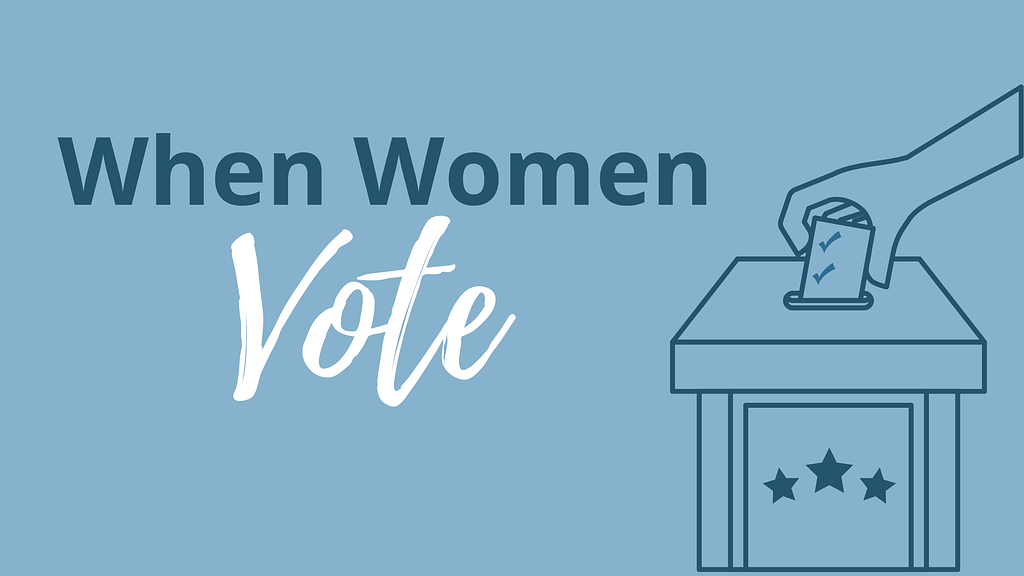 “When I’m sometimes asked when will there be enough [women on the Supreme Court] and I say, ‘When there are nine,’ people are shocked. But there’d been nine men, and nobody’s ever raised a question about that.” –Supreme Court Justice Ruth Bader Ginsberg

It’s likely you’re familiar with this quote, as the famous “when there are nine” tag has been displayed in every way possible the past few months. You’ll find it written on the sides of buildings, on t-shirts, and even on cakes. This is all in celebration of the late Supreme Court justice, the “Notorious RBG” (Ruth Bader Ginsberg). As probably one of the most noted advocates for women’s rights in recent history, she is the perfect example of why it’s so important for women to vote. Historically, if women didn’t stand up for themselves, no one would. Luckily, that has improved over the course of time, but Ginsberg’s quote still urges us to push for equality across the board. That’s why voting is so imperative to not only democracy, but to female empowerment as well.

Let’s begin with a little history on women’s voting rights. Women in the United States received the right to vote on August 18, 1920. According to Austin Monthly, in March 1918, Texas women were given the right to vote in the July 27 primary for Travis county, made official by the Governor. Nationally, about 64% of women are registered to vote, as opposed to about 60% of men. In 2012, about 51% of women voted, over about 48% of men that same year. According to Pew Research Center, starting in 1980, the percentage of women voting has been slightly higher than men every election. Could this just be a coincidence?

“Politics [don’t] interest you because you have no interest in changing a world that suits you so well.” – Enola Holmes

There’s a quote from the new Netflix film Enola Holmes that I believe perfectly sums up why women typically vote more than men. The film is set in 19th century England, but the message remains relevant. In the film, Sherlock Holmes meets a suffragette and expresses that he doesn’t care for politics, and she responds by pointing out that “politics [don’t] interest you because you have no interest in changing a world that suits you so well.” Strikes a chord, no? Voting should be about what is best for everyone, but isn’t human nature to want to benefit from the outcome as much as possible? And if life is already going so well for you as a result of your government, why shake things up? If we’ve learned anything from the past year, it’s that America was systemically set up to benefit men more than women, and specifically, the white male population.

How can we continue to fight the good fight and encourage others to do the same? As hard as it might be to hear, some people will never consider themselves “feminists”.

New World Encyclopedia states that the first known use of the word “feminisme” was first used in 1837 by Charles Fourier to describe the emancipation of women he saw for his Utopian future. Today, “feminism” means simply “the belief in social, economic, and political equality of the sexes.” Unfortunately, many have a very confused, negative idea of it’s meaning. Instead of the true meaning of a feminist, people attribute feminists to “man-haters”, or “stay-at-home-mom-shamers.” In reality, true feminists have nothing against the choices that other women make freely. The whole point is to give women the option and platform to do what they choose. Due to this unfortunate light society has painted feminism in, some men and women will always have a negative connotation towards feminism. Can we win them all over? No. You can have a calm, rational conversation with people hoping to persuade them, but at the end of the day they will believe what they want. The best way for us to set the example of feminism is just to educate ourselves and V-O-T-E!

Why do our votes matter now? Well, whatever your political beliefs, we have something historic happening in our country right now: Joe Biden, democratic presidential nominee, has chosen Senator Kamala Harris as his running mate. Harris is only the third woman to run as a vice presidential candidate for a major party. She’s the first Black and South Asian woman to do so. Whether or not they win the election, this is a step in the right direction for women in politics. There are people that say a woman should not hold a high office in government, because they’re “too emotional” and “ too reactionary.” But how could we possibly know how a woman would act in a position of such power if we’ve never even had one? This is the opinion of someone who is clearly unaware of the power that women have, and the massive contributions we’ve made to society.

Even if Harris does become Vice President, we’ve still got a long way to go. There remain many inequality issues that women face; including the pay gap, reproductive rights, lack of federally mandated paid maternity leave…the list goes on. This is why it is so important to vote. How can we ever change these issues if we don’t have true representation in our government? It would be romantic to think that whomever we vote for, they’d represent and protect equity for every single American. Unfortunately it’s just not reality. We simply don’t see that represented in today’s politics. The death of Ruth Bader Ginsberg shook the female population of this country. What does it say that her passing left so many scared for the future?

So, once more for the ladies in the back, VOTE! And not just in presidential elections. Vote in mid-terms and local government elections as well. The more we project our voice into government, the closer we’ll see that scale get to 50/50.

For our Texas ladies, you can check on your voter registration, find your polling place, and much more at VoteTexas.gov. In Travis County, early voting has closed as of October 30, but there’s plenty of time to make your plan for November 3rd! Another great national resource is Vote.org.

Justine Boss
Previous post All Things YWA: Your Questions, Answered. Next post Why It’s Essential to Have Women in Leadership

Women Who Opened Doors: Feminists in History Who Rose to the Challenge