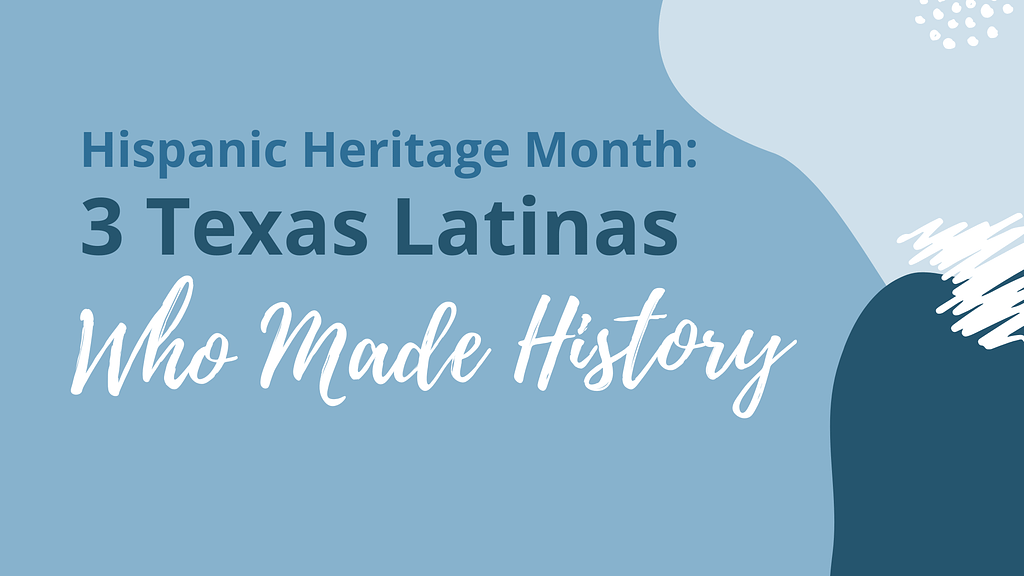 In 1968 the United States began officially celebrating its citizens of Hispanic backgrounds with Hispanic Heritage Week.

Twenty years later, it was expanded into a full month-long period of honoring and recognizing the cultures, accomplishments, and history of those who trace their roots back to Latin nations.

As this month of recognition for the rich cultures of these countries comes to a close for 2020, Let’s take a look at a few local Hispanic women in recent generations who’ve left a lasting impact. Here are just three of many Texas Latinas whose accomplishments and contributions have gone down in history.

Emma Tenayuca (1916 – 1999) was an activist, labor rights organizer, and educator from San Antonio. Growing up in a world where workers were still at the mercy – or lack thereof – of their employers; where racism against her people was blatant and widespread; and where women were considered inferior to men, Emma quickly committed herself to fighting against all of those problems.

In 1938, Emma led 12,000 workers – mainly Hispanic women – in a strike to fight wage cuts. The Pecan-Shellers’ Strike to fight against unfair wage cuts is the largest strike in San Antonio history. It is “regarded as the first labor victory for Tejanos and Mexicans in U.S. history.”

A central figure in the radical labor movement of the time; co-organizer of the Confederation of Mexican and Mexican American Workers; leader of sit-ins, marches, and demonstrations, Emma dealt with arrests, controversy, and much negative press. Despite this, she worked tirelessly (earning her the nickname La Pasionaria – “The Passionate One”) to help ease the hardships so many were facing, and prevent them for future generations.

Adina De Zavala (1861 – 1955) was a teacher, historian, and Texas history preservationist. Granddaughter of the first vice president of the Republic of Texas, Lorenzo De Zavala, she is best known for saving the Alamo as an historic site.

Passionate about history – especially that of her home state, Texas, Adina began meeting with a group of similarly minded San Antonio women in the late 1880s, which soon merged with the Daughters of the Republic of Texas (DRT).

Teaching school, authoring a book, organizing the Texas Historical and Landmarks Association, and more; Adina’s greatest project would become the preservation of the Alamo. The site of a 13-day battle which would help assure the overall victory of Texas during the war for independence from Mexico, others failed to see its significance. A grocery firm bought some of the property – certainly not to preserve it. Many, including some in the DRT, were questioning the authenticity of the building. Adina and other members of the DRT spent years fighting to keep it standing.

Another DRT leader, Clara Driscoll, is more well-known as “the Savior of the Alamo.” To protect it, she bought the barracks building next to the Alamo chapel. However, it was also Clara who advocated for the removal of that very same building. To stop this, Adina gained national attention by barricading herself within the barracks for three days protesting the planned destruction. It is thanks to her that we can visit many of the important historical sites in our state.

Irma Rangel, a Representative of many firsts

Irma Rangel (1931 – 2003) was the first Mexican-American woman elected to the Texas House of Representatives. She graduated from college in Texas before moving to Venezuela to begin a teaching career, which she continued for over a decade in Caracas, as well as in California and Southern Texas.

At 35, Irma decided to change careers and become a lawyer. She graduated with her law degree from St. Mary’s Law School in San Antonio in 1969. From there, she became one of the first Hispanic female law clerks with her clerkship for a federal district judge. She became one of the first Hispanic female assistant district attorneys in Texas – where she fought to get equal pay to her male counterparts. In 1973, Irma became a partner at a law firm in her hometown of Kingsville, TX. She was the only Hispanic female attorney in the city.

Winning election to a seat in the Texas House of Representatives was a groundbreaking, important accomplishment to say the least – but it was just one of many accomplishments for Irma Rangel. Irma served for over two decades in the House, and won multiple awards and accolades. She became well known for her support for improved education, equal rights, and for programs that aid women, minorities, and the poor.

Hispanic Heritage Month has come to a close this year. However, it’s always a good time to learn about and celebrate Hispanic cultures and history! Texas State Historical Association is just one of many great resources with information on people and events within Texas history. Have another educational resource; or know a story or an individual that deserves recognition? Please share with us!