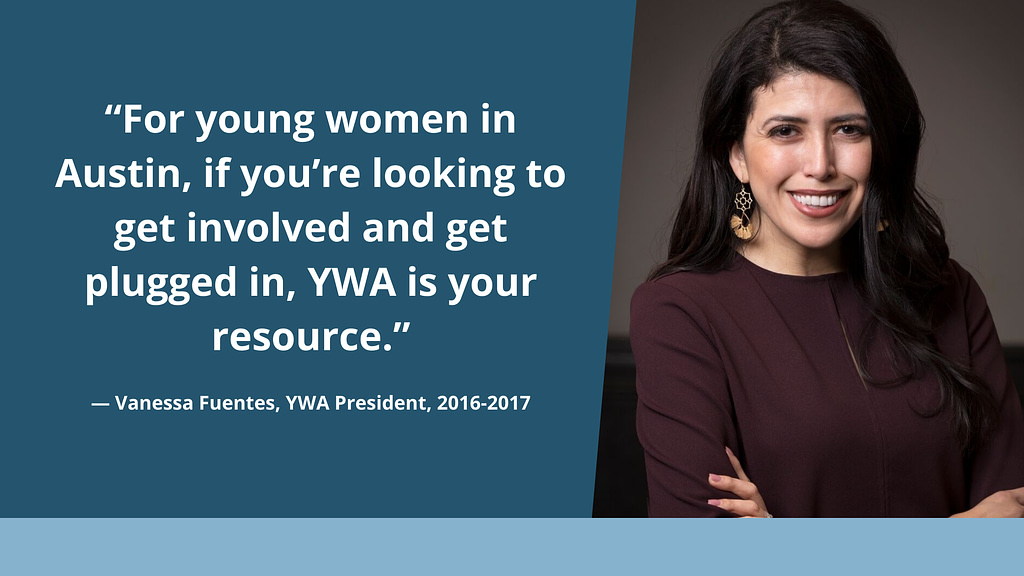 Past YWA President Vanessa Fuentes Looks Back on Her YWA Experience — And Forward to the Future of Austin
On her Austin City Council campaign website, Vanessa Fuentes writes, “I was raised by a Mexican immigrant mother and Military Veteran father from El Paso.

“My mom and dad taught me and my siblings the importance of education as an opportunity equalizer and raised me with the values of hard work and service to the community.”

Vanessa, who served as YWA President in 2016–2017, graduated from The University of Texas as a first generation college student in 2008 — smack dab in the middle of a recession. But, while many of her friends moved back out of Austin to find jobs, she was determined to stick it out.

“I wanted to join YWA because I wanted to build a friend group with like-minded women who wanted to grow professionally and personally,” Vanessa said.

“That’s what started my YWA journey, and it turned out to be immensely helpful. I didn’t know it then but navigating the corporate structure was going to be a significant challenge for me.”

YWA, says Vanessa, gave her access to a sounding board of women with a diverse range of experiences, and people to turn to when she had questions about the corporate world and how to move and be in a place that was relatively unfamiliar to her, having come from a blue-collar family.

And, like many of us who graduated during that recession, Vanessa’s first job wasn’t exactly the career she saw for herself in the future. She knew she had to make the most of experiences outside the office to best position herself for her next move.

“With YWA I started gaining leadership skills, and it gave me opportunities to do things that I wasn’t doing at my job like build websites, plan events, and fundraise for the first time,” Vanessa said.

She added, “Aside from the support system, aside from the leadership building, YWA also provided me with mentors — in a way that felt really organic and natural.” [This was pre-YWA Connect, which is a formalized mentoring program built up in the years since Vanessa’s term.]

From being involved in AU40 and other general YWA events, she met women who soon became friends and mentors. One recruited her for a job, and she also connected with other leadership roles through her YWA service.

“For young women in Austin, if you’re looking to get involved and get plugged in, YWA is your resource,” Vanessa said.

And you’ll probably make some lifelong friends, too — Vanessa says the friends she made in YWA are still her friends today. “They were even in my wedding!”

“At the beginning of my career, I didn’t think it was possible,” she said.

“There weren’t a lot of officials that look like me, that were Latina, came from Hispanic background — of course there were men, but Latinas in general are very underrepresented at the local level here in Austin.”

Then she got a job at the Capitol, which exposed her to legislators from all over Texas: “I started to see up close how the system includes some voices and leaves out others, and how important it is to have diverse voices at the table.”

The most important revelation Vanessa had while working at the Capitol, though, was that she could do this too. Once she saw how the system worked (or didn’t work), she began to understand how the game was played — and that she was perfectly capable of playing it.

Now, just 12 years after graduating into one of the slowest job markets our generation can remember, Vanessa Fuentes is running for Austin City Council.

From her campaign website: “I’m committed to amplifying the voices of my community in this critical moment of change in Austin.”

The Power of YWA

“You get out of it what you put into it,” Vanessa said. “What I like about YWA is that it’s set up so you can have different seasons of your life while still in the organization.”

Plenty of women through their 20s and 30s will come into the organization for a few years, maybe step back for a while because of a new, demanding job or life change like a marriage or baby — but then a couple of years be ready to come right back.

“I like that flexibility of YWA, because the mission is unchanged — creating the next generation of women leaders.”

She added: “And it’s an Austin organization founded by women in Austin, so it has a very unique vibe to it. It’s homegrown.”

For Vanessa Fuentes, YWA was part of the structure that kept her moving forward, even when odds were against her. Having the support of and connections to other women in the group helped move her life forward even in difficult economic times.

YWA is accepting new members through the month of October. Learn more about membership benefits and join here.

Victoria Fryer
Previous post LEAD: One Voice is Powerful, but Collaboration is Power at One Young World 2019 Next post Landing the Job: When Networking Really Pays